Choose your country or region:

Each wastewater treatment plant is unique, with its own capacity, layout, processes and equipment, and effluent limits. And each plant is faced with rising energy and chemical costs, and regulations that change or become more stringent over time.

At Hach®, we embrace the challenge to continuously improve wastewater monitoring equipment and processes, including nutrient removal, aeration control, nitrification/denitrification, sludge dewatering, and other plant operations. Whether in primary, secondary, or tertiary treatment of wastewater, or in understanding solids handling, regulations, or the promise of a Water Intelligence System such as ClarosTM , Hach innovations and new applications can help you stay in compliance and reduce operating costs, doing more with less - with the confidence that your plant is running smoothly.

Modern sanitary sewer collections systems move wastewater through a series of pipes from residential buildings, businesses, and industrial sites to wastewater treatment facilities for processing and discharge. Some older systems know as combined sewer systems also carry stormwater runoff in addition to the wastewater from residential and commercial sources.

The wastewater flows through underground sewer mains, most often by gravity, but sometimes assisted by pumps situated at lift stations. Depending on the topography of an area, these force mains vary in length up to a few miles long. Interceptors are locations where two lines meet and flow into a larger pipe, and can include large chambers accessible by manholes. 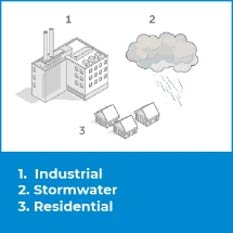 Preliminary treatment is typically the first process within the treatment and consists of screening and de-gritting. Screening is the process of removing trash, rags, and other debris by passing the water through a mechanical screen or rotating drum. Grit is removed by reducing the velocity of the wastewater so that heavier inorganic particles like pebbles and sand can settle to the bottom and be removed via gravity. The grit and screenings are washed and compacted before being collected in a dumpster. These preliminary processes are very important for modern water resource recovery facilities, as grit and debris can irreparably harm downstream processes including primary clarifier mechanisms, aeration diffusers, and membranes.

During primary treatment, primary clarifiers allow organic solids to settle through gravity, while fats, oils greases are allowed to float to the surface. The settled solids are referred to as primary and often are thickened in a downstream process before delivery into an anaerobic digester. The floating fat, oil grease collected from the surface and are typically added directly to the anaerobic digester. A typical primary clarifier will remove approximately 70% of the solids and 45% of the Biochemical Oxygen Demand from the screened wastewater. Modern facilities that operate enhanced biological nutrient removal processes often extract or ferment the carbon in the primary sludge and dose this side stream into anaerobic or anoxic processes downstream, as a food source for the respective biology. 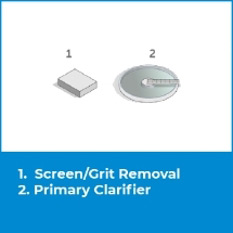 Secondary treatment removes the soluble organic matter, nutrients such as nitrogen and phosphorus, and most of the suspended solids that escape primary treatment. Most often, biological processes are used in which microbes metabolize organic compounds and nutrients to grow and reproduce. The two most common biological secondary treatment processes are growth and suspended growth systems. A suspended growth process fosters the growth of suspended microorganism flocs from individual organisms already present in the wastewater and in the return activated sludge. The flocs contain organisms that can remove the pollutants through aerobic, anoxic, and anaerobic environments. Once the pollutants are removed, the flocs are sent to a secondary clarification process where they separate from the water via gravity. A portion of sludge in the bottom of the secondary clarifier is then directed back upstream to blend with the primary effluent (Return Activated Sludge) to create mixed liquor. The remainder of the sludge is removed from the process (Waste Activated Sludge) to create the ideal ecology of microorganisms. Attached growth systems rely on the microorganisms to attach to a media, and create a biofilm. The settled sewage is either mixed or sprinkled over the media where the microorganisms remove the pollutants. Like the suspended growth process, biofilm fragments and suspended flocs are sent to a secondary clarifier for separation where sludge is recycled and wasted and clean water is discharged to the next process.

For biological treatment to function efficiently, organisms require nutrients in a balanced ratio, including carbon, nitrogen, and phosphorus (referenced as C:N:P), as well as trace elements including iron, copper, zinc, nickel, manganese, potassium, sulfur, and other components which are typically present in wastewater. The commonly accepted C:N:P Ratio is 100:5:1, although some facilities thrive outside of this ratio, while others experience polysaccharide slime formation or filamentous bacteria growth that inhibit the biology and settling in the secondary clarifier.

Biological Nutrient Removal (BNR) alters the environment of the microorganisms to remove nitrogen and phosphorus from the water. A BNR process consists of anaerobic (no oxygen or nitrate), anoxic (no oxygen, nitrate is present), and aerobic (oxygen present) stages, during which the water is moved through a series of chambers to perform various biological functions.

Chemical treatment processes can also be used, such as the chemical removal of phosphorus. By introducing a chemical precipitant to within the aeration basin and clarifiers, phosphorus is removed by flocculation, binding into insoluble compounds that settle out and can be removed as sludge. 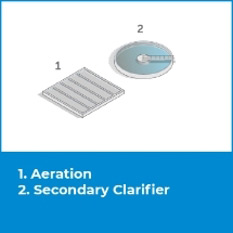 Whether you are facing new regulations or trying to become more efficient, we can provide solutions for monitoring nitrate, dissolved oxygen, and other parameters that can save energy and chemical costs while optimizing nitrification and denitrification in your facility.

Whether you need a solution for chemical or energy savings, we can provide monitoring solutions that can save costs while optimizing your Phosphorus removal.

If you are interested in lowering energy and maintenance costs, we have products with innovative luminescent technology to monitor dissolved oxygen and optimize your aeration control.

Does your facility chemical based on flow rate? Typical facilities do, but this can lead to wasted chemicals, increased hauling costs, and potentially fines! Our suspended solids sensors can help you dose based on solids concentration, optimizing your chemical use and saving you money.

In tertiary treatment, techniques such as filtration, disinfection, carbon absorption, and other processes are used to remove the remaining organic load, suspended or dissolved solids, pathogens heavy metals that pass through other treatment processes. Also called effluent polishing, tertiary treatment raises the effluent quality to the level suitable to its intended use, whether for discharge into lakes, rivers, or oceans, reuse as non-crop irrigation (parks, golf courses, greenways, etc), groundwater recharge, or in certain cases, as influent to drinking water plants. Wastewater plant effluent must be monitored to ensure compliance with effluent permit limits, which vary based on jurisdiction and country. 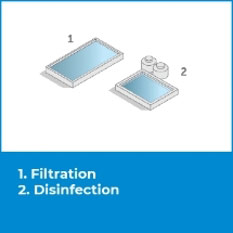 The method for handling the sludge removed from the process depends on the volume of solids as well as other site-specific conditions. Aerobic digestion is often used by facilities less than eight million gallons per day of inflow. Waste Activated Sludge and if present, Primary Sludge, are added to an aerated reactor where microorganisms feast on the organics and microorganisms present in the sludge to reduce the volatile solids content and the overall mass of sludge. Anaerobic digestion is typically used at facilities greater than eight million gallons per day of and involves the use of sealed reactors to create an anaerobic environment for different organisms to feast on the organics and microorganisms in the sludge through the processes of and methanogenesis. The methane formed by anaerobic digestion can be used to fuel boilers to heat the digester, flared, or cleaned and repurposed as a green energy source.

Thickening involves concentrating the sludge by removing a percentage of the liquid portion by adding polymer and is often employed before anaerobic digestion. Dewatering with belt presses, centrifuges or other means further concentrates sludge into a cake. The cake can be further dried, or simply through land application or landfills. 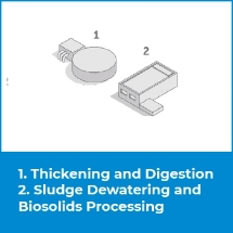 With these systems, data on flow rate, water composition, dissolved-oxygen, nutrient levels, and other factors are more easily tracked and verified. This leads to more responsive treatment options, automation capabilities, and data visualization and report generation.

Using data-driven insights into water quality, flow rate, and other factors, operators can reduce overtreatment (chemicals as well as aeration blower run time) while knowing their plant will remain within compliance limits.

As regulations become more stringent and plants need to find cost-savings, Water Intelligence Systems such as Claros will become more important and widely adopted. And with the Hach’s growing suite of Claros-Enabled sensors, controllers, devices, Process Management systems, and lab equipment, operators can configure a system that fits the unique requirements of any plant. 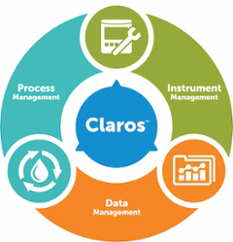 
Regulations and permit limits vary from region to region and country to country. Generally, target limits are established by the acting authority, and plants measure and report to demonstrate compliance with established limits. In this way, important parameters that indicate water quality and environmental and health standards are monitored and maintained, ensuring the continued health and safety of the populations being served.

For information regarding regulations in the US: https://www.epa.gov/npdes

For information regarding regulations in the EU: https://www.eea.europa.eu/themes/water/water-management


While effluent from wastewater treatment facilities is commonly discharged to the environment in rivers, oceans, or other bodies of water, there are a variety of other options for discharge. These include agricultural irrigation; use in parks and recreational facilities (golf courses and sports field irrigation, ); wildlife habitat or aquifer/wetland/marsh recharging; industrial uses such as process water; street cleaning; or direct potable reuse where water is sent to a drinking water plant for further treatment.